I Saw a Miracle Today...

Over the past few months, Father God has spoken through different prophets and said that we would see more miracles. He also said this in Messages from God. In the coming days, we're sharing different stories that came out recently about the mighty ways God is moving to help us in our times of need. It's a reminder to wait on God and also to be thankful for ALL that we have.

On a personal note, I found myself apologizing to Father God the other day. I was reading about all the power outages in Queens, NY and realized I didn't thank God for keeping our power on. Our lights flickered maybe 50 times or more but we never lost power. Whatever your need is, trust in God to make the way. He never fails. For someone that needs it, I hear the Lord saying, "Expect a move from God". After a news site aired the story about the Rodriguez family, Harris County Precinct 1 started a GoFundMe page to help residents getting evicted. In a few days, they've raised more than $228,000. Glory to God!

The fact is, there are thousands of families all over Houston and the rest of the country that can't pay rent right now. Thanks to the eviction bans, residents can't get kicked out of their homes for not paying rent if they can prove it's because of the COVID-19 pandemic.

Regardless, the story of the Rodriguez family touched a lot of people. "We ain't got nowhere to go," Israel Rodriguez said outside of what was once his family's apartment. Israel, his 20-month-old son with the same name, his brother, 4-year-old Fabian and their mother are some of the estimated 40 million Americans facing eviction in the downward spiral of the COVID-19 economy.

"They didn't rush us, but they was like, 'Get everything you need,'" Rodriguez said. Rodriguez admits he hasn't been paying rent and is behind thousands of dollars. 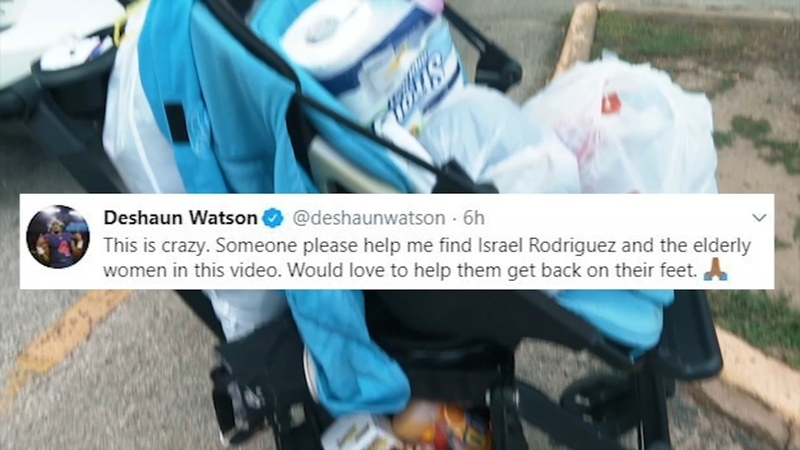 This is crazy. Someone please help me find Israel Rodriguez and the elderly women in this video. Would love to help them get back on their feet. 🙏🏾 https://t.co/FfUz5oUwDC

"This is crazy," Watson wrote on Twitter. He's asking the public to help him find Rodriguez and the elderly woman evicted featured on another news site. Watson says he wants to help them.

Constable Alan Rosen wrote on Twitter, "It breaks our heart to evict people." He went on to say he hopes this single story starts a movement where we work together to start a discussion about poverty.

It breaks our hearts to evict anyone. We work compassionately to ensure we help, as much as possible, those evicted. The below is a resource flyer we give to all. We have received generous offers of financial aid since story aired. Working on a way to get $ to those in need. https://t.co/xReQgbucDd pic.twitter.com/zaN5D5vMXO Story shared via ABC News: DETROIT, Michigan -- Residents in Detroit are left with more questions than answers after a 20-year-old woman believed to have died was found breathing at a funeral home.

The Southfield Fire Department released a statement saying paramedics responded to a call for an unresponsive female Sunday morning. When paramedics arrived on the scene, they found the woman to not be breathing. According to the statement from the fire department, the paramedics performed CPR and other life saving methods for 30 minutes.

After their efforts, "given medical readings and the condition of the patient, it was determined at that time that she did not have signs of life." Authorities say per standard operating procedure in a situation where foul play is not suspected, the medical examiner's office was contacted and given the medical data.

The medical examiner's office again determined the patient to have expired, and her body was released directly to the family to make arrangements with a funeral home. WXYZ reports hours later, staff at the James H. Cole funeral home realized the woman was still breathing. It is unclear what led up to the call for the unresponsive woman. Authorities are not releasing additional personal information on the woman at this time. Story shared via ABC News and YouTube: WEST MARLBOROUGH TOWNSHIP, Pennsylvania -- On Tuesday, an incredibly risky water rescue in Pennsylvania was caught on camera. Four strangers, turned good Samaritans, saved a father and four children from a sinking vehicle as the floodwaters continued to rise. The video, taken outside of Philadelphia, is heart-racing, and shows the true bravery of everyday heroes.

"You can see how strong the river is and it's pulling them away," says Dan DiGregorio, one of four strangers who rushed in to save them. "Honestly, out of nowhere, this backhoe comes around the corner and we immediately started screaming at the guy driving it."

That's when the group moved in to help. "We're yelling at the dad, who's now about 15 feet away from the car with his baby in his arms. He's almost going under. So, we tell him get back to the car," DiGregorio said. The four strangers made a human chain, holding onto each other's belts, to get the family members out, one by one. The oldest child almost slipped away, but DiGregorio was able to grab him by the wrist.

"Even last night, I couldn't sleep because I can still see the fear in his eyes as I'm holding on to them. Because if I let go, he's gone," he said. "We were all very lucky. I mean, it wasn't smart by any of us, but it was something that had to be done as soon as possible." Story shared via IHR: Three men were rescued after being stranded for nearly three days on a tiny deserted Pacific island. The three men set out in a 20-foot boat on July 29 and planned to travel from Pulawat to Pulap atolls in the Federated States of Micronesia. During the 30-mile journey, their boat ran out of fuel, and they got knocked off course.

They eventually ended up on the uninhabited Pikelot Island, which was about 120 miles from where they set out. When the men didn't arrive at Pulap, authorities contacted U.S. Coast Guard's Joint Rescue Sub Center in Guam and requested help locating their vessel.

A U.S. Air Force KC-135 began flying search patterns over the area and noticed "SOS" had been written in the sand on a tiny island. The pilot radioed a nearby Australian boat, which dispatched rescue crews to Pikelot Island.

“We were toward the end of our search pattern,” said U.S. Air Force Lt. Col. Jason Palmeira-Yen, the KC-135 pilot. “We turned to avoid some rain showers and that’s when we looked down and saw an island, so we decide to check it out and that’s when we saw SOS and a boat right next to it on the beach. From there we called in the Australian Navy because they had two helicopters nearby that could assist and land on the island.”

The men were in good condition, and an Australian military helicopter provided them with food and water. The men were eventually taken home by a Micronesian patrol vessel. Story shared via ABC News: VENICE, La. -- Two children and their parents clung to their overturned boat in the Gulf of Mexico until the Coast Guard could rescue them Wednesday afternoon. The children, aged 8 and 11, and their parents all were in good shape when they were rescued, Petty Officer Sydney Phoenix said.

The family called in by radio on Wednesday morning to say their 20-foot-long (6-meter-long) boat was taking on water in the Gulf of Mexico off the coast of Venice, Louisiana, according to a Coast Guard news release. Once an airplane crew located the boat 17 miles (27 km) south of Southwest Pass, a helicopter was able to lower a rescue swimmer to help them until a Coast Guard boat could arrive.

“The fact that they were able to call in on channel 16 using their radio and reported the situation and how many people were aboard greatly assisted the crews in the search,” said Lt. Cmdr. Patrick Plummer, search and rescue mission coordinator for the Coast Guard's New Orleans sector. “The crews knew what they were looking for and the general area the call came from which resulted in the family’s safe return.”

All four also were wearing their life vests. Phoenix said records didn't indicate where the family was from. Since none of them had any medical problems, they simply left once the helicopter brought them back to Venice, she said. Story shared via ABC News: WHARTON, New Jersey (WABC) -- A tree crushed a home in New Jersey during the height of Tropical Storm Isaias, trapping a 7-year-old girl in the rubble. But the homeowner, even though his house was destroyed, is simply thankful he got his family out alive.

When the enormous oak tree fell on Greg Ramirez's Wharton home, in an instant the world went dark. "Everything just went black," he said. His 9-year-old son was right next to him and easy to find in the rubble, but his daughter Mia was several feet away and buried in debris.

The house was collapsing around them, as gas and dust filled the stifling summer air. His prayer would have to be quick. "'God, take everything away from me,'" he said. "'Take my house, take my things, help me find my daughter...help me take my family out, and I'll be OK.'"

He waved his hand in the dark above the pile of rubble -- it was hopeless of course. But hopeless is where prayers are answered. "I'm reaching with my left to see if I can feel her, because I couldn't see her," Ramirez said. "Her little hand grabbed my hand. I grabbed with full force, and I yanked her out. She got scratched when I yanked her out."

He got both his kids outside and left them with a neighbor. His fiance was still upstairs, and he went back inside to help her out. The house was demolished and a total loss. But the family is safe. "I think that's why I'm OK losing everything," he said. "Because I found my daughter, I got my family out, and the rest is just material stuff. A GoFundMe page has been set up to help the family back on its feet. Still, they are just grateful for what they call a miracle.